A week away from home, chores, errands, and weeds that keep screaming at me…ahhh I can rest, recreate, and write, write, write. Or so the plan goes. I’m hoping to find lots of lovely, uninterrupted writing time while Dear Husband and I enjoy our week here in gorgeous Sunriver, Oregon. 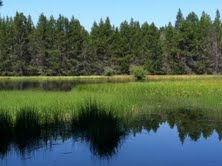 Last week I ran the red, hot query letter that landed Cathryn Cade her first book deal, and today I’m posting Kylie Wolfe’s successful query. Though Kylie eventually won her book deal with publisher Lyrical Press through a contest, (Yay Kylie!!!), this query letter resulted in two requests for full manuscripts, making it quite successful by any measure. Her debut novel has a tentative release date of December 2012, and she tells me she is currently spending every spare moment working on the edits her editor loves to send her. I can’t wait for your book Kylie! Thank you so much for sharing your letter with us.
Here’s that successful query letter:

I have attached a synopsis and the first three chapters of my 80,000 word futuristic romance, Rayven's Keep, for your consideration.  It is the first book in a series of stand alone stories that follow four men who survived the devastating war that destroyed their home world.  Below is a brief summary of the story requested in your submission guidelines.

All Tru Creighton wants is to be taken seriously by her wealthy and powerful family.  Restless and determined to prove herself she makes a bold move.  Thinking she is investigating a possible embezzlement of company funds and shipments that have mysteriously vanished, she unwittingly uncovers something darker and much more sinister.  It isn’t until it is too late that she realizes she has put herself in serious danger. Desperate for help she turns to the one man she hopes can rescue her.

Nick Rayven knows all about survival.  A former soldier, a refugee from a world destroyed by war, he has seen the dark side of human nature.  Trying to put his shattered life back together his focus is solely on carving a new place for himself and his growing business. Emotionally numb, the last thing he wants is to find his life again in turmoil.

Running from an unknown enemy, tasked with protecting Tru, Nick discovers keeping her safe is anything but simple.  His hard won, ordered life is turned upside down by murder, drugs and an interplanetary conspiracy neither expected.  To complicate matters more, her very presence awakens emotions and feelings he long thought suppressed.

Nick’s strong sense of duty prevents him from acting on the growing attraction between them, but Tru doesn’t have the same qualms.  She willingly follows where her heart leads and it is set on the enigmatic, honorable man fighting to keep her safe.

I am an active member of RWA and was recently accepted for PRO status.  I also belong to both Rose City Romance Writers and Greater Seattle Romance Writer's chapters.  This manuscript is currently entered into the RCRW Golden Rose contest.

Thank you for your time and consideration.  I look forward to the opportunity to share the entire manuscript with you.
Regards,
Kylie Wolfe

And finally on a personal note, though I am loathe to jinx things, (I’ve suddenly become VERY superstitious-I’m knocking wood as I write this), a week after I sent out my first queries I received a request for a partial! I’m trying to stay very rational, remembering that this first novel was always meant to be a learning experience. And what a learning curve I’ve been on throughout this query process!

Thank you again Kylie, not only for sharing your letter, but also for being so supportive as I’ve been going through the scary query/partial request adventure.

Posted by Monica Knightley at 12:43 PM No comments:

When last we met I was experiencing great angst over writing a query letter. Well, that letter was written and sent out this past week! I immediately felt sheer terror and a lot of nausea. On the other hand, finishing final edits on my first novel, writing the required synopses of varying lengths as well as the query letter, were all must-dos on my summer task list and I’m thrilled to be able to make those check marks next to them. For the two weeks that remain of my summer break I’m turning my attention to my half-finished YA paranormal and am enjoying the company of my main characters, Angela and Aaron.

My last post also included a request for writers who would volunteer to share their successful query letters with my readers. Two brave souls came forward with query letters! This week I’m sharing Cathryn Cade’s first, last, and only query letter she’s ever written. Yes, she has been so successful for Samhain Publishing that she’s never needed to write another query. She writes red, hot romance in both her Orion Series as well as her new Hawaiian Heroes Series. The two Hawaiian Heroes books, Walking In Fire, and Rolling In The Deep are sexy paranormals set in the beauty of Hawaii. (All of Cathryn’s books are available at Samhain, Amazon, and BN.com and you can visit her website at cathryncade.com) Thank you so much Cathryn for sharing this query letter!

I am seeking publication of my novella in your upcoming anthology, On the Prowl.
My story, ‘Tyger, Tyger, Burning Bryght’ is attached, complete at 25, 900 words. Attached also is the synopsis.

Tyger takes place in the future, in the far reaches of outer space. That is where the Tyger shape-shifters of planet Bryght exist. It is a sensual romance, set against a backdrop of adventure and intrigue. The space ship Orion is one of a fleet of huge cargo and passenger carriers that ply space between the galaxies. The crew is from such far flung planets as Earth, Indigo, Pangaea, Serpentea, and Bryght. This is the first of a series of stories about the Orion’s crew, and their sensual trials and triumphs.

Tryon Jag is a virile, successful Tygean, even owns his own firm, offering the prized services of his Tyger navigators to ships that wish to bring their goods to the remote planet of Bryght. He is returning home on the Orion when he is caught off planet at moon rise. This is when the males and females of Bryght go through their yearly mating shift. Jag is now a risk to himself and others on the Orion as he shifts into a dangerous, if gorgeous and sexy, half-man, half-cat, with the sexual needs of both raging in him. He needs a mate, to calm and soothe him so he can do his job, and get the Orion safely to port. Unless a female Tygean, preferably a young, and relatively innocent one, can be found among the crew and passengers to close herself into the ship’s jungle-like arboretum with him, the Orion may well be destroyed in the dangerous asteroid belt that surrounds Bryght. The fact that some eco-terrorists have smuggled a bio-bomb on board, intending to destroy the ships navigation system entirely unless their demands are met, only adds to the tension.

Calla Fellura, a lovely young crew member who secretly admires Jag, agrees to mate with him, and finds herself swept into a heated jungle of sensuality that she could never have imagined. Calla must surrender to triumph, and she does both.

I have been writing fiction for years, but only recently discovered the joys of reading and writing novellas – the perfect length of story for me, as I am also a busy elementary school librarian. I hope you will read Tyger, and consider it for your anthology.
Sincerely,

As a post script I should add that Cathryn is now such a successful writer she has recently retired from teaching and is able to be a full time writer. Sigh…

Next week I’ll be sharing a query letter from Kylie Wolfe, whose debut novel will be released this fall.