As I’ve been preparing for the release of my newest cozy mystery, ‘Tis the Witching Time, I’ve asked my Facebook readers if they believe in ghosts. I’ve received some fascinating responses. I also promised to answer this question myself:
I do believe in ghosts. As one commenter, who is a believer, said, “The proof is in the pudding.”

My tale begins almost three years ago…
I have no idea why I decided to start reading an Anne Rice book just before my husband had three business trips over the course of three weeks. When I’m home alone this big old house does a lot of settling and creaking, and things tend to go bump in the night. Reading a scary book at night when you’re alone in the house is not a good idea. One night, after two hours of reading in bed, I was sure that there was some kind of entity in my house and it was going to do something during the night. Maybe just your basic minor destruction—I was fairly confident that it didn’t want to hurt me.

The next morning I discovered the first of what would become a series of strange occurrences that would take place over the next several weeks. It turns out that SOME entity knocked my high school graduation picture off the shelf where it had happily sat for many years, shattering the glass in the frame all over the floor. The following week I was alone in the house and felt something tug on the hood of my sweatshirt. Sometime later my husband came home from one of those business trips. Shortly after getting home he walked into his office downstairs. A minute later he called upstairs to me, “What happened to my desk? Why is everything shoved to one side?” There were a few other odd happenings as well, but these are good examples of what was going on in my house.

Our ‘ghost’ became a running joke. And, by the way, a ghost is much preferable to some rodent in my house, and we never found any evidence that there was one. But we did come to the conclusion that if we did have a ghost it was acting up because we were doing some work on the house to prepare it for sale. We thought it didn’t like the idea of us leaving. We never did put it on the market…the Portland market became too crazy.

Fast forward several months.
In November, we had family members (names will not be used to protect the innocent) staying with us for ten days while they waited for their dead furnace to be replaced. One member of the family slept downstairs on the couch in the family room, along with their family dog. I HAD NEVER TOLD THEM ANYTHING ABOUT OUR POSSIBLE GHOST.

On Thanksgiving morning, a week after they had moved back home, we were all doing the local Turkey Trot Walk. While we were going up a steep hill, the family member who had slept downstairs said to me, “Is your house haunted?” Or maybe she said, “Did you know your house is haunted?” I really can’t remember now. I laughed and told her that we had been having some strange things happen, and were starting to wonder. But in a HaHa sort of way.

She went on to say, “Well, one night while I was downstairs, I saw a ghost. And felt it.”

About this time, I started to think if the steep hill didn’t kill me, this news just might.

Subsequent questioning revealed that one night she saw a foggy cloud that had formed not far from where she was sitting. There was no form to it, so she couldn’t say whether it was male or female. She said again that she could feel something—something not normal, something ghostly. She showed me exactly where it had been. It was less than two feet from where my picture had flung itself to the floor. Remember, she knew nothing about that prior to this discussion.

Once the minor remodeling was finished, the ghost became quiet again. From what I've read this is common behavior for ghosts. ;-)

In ‘Tis the Witching Time I describe a possible ghost exactly as my family member described what she saw.

This blog post includes parts of two previous posts I wrote when these things were occurring. Just now I saw how I ended the last post I wrote two years ago, and it made me smile.

Now, I just need to channel this into a good ghost story book…

I had forgotten I’d written that. But, YAY, I did write my ghost story book!! 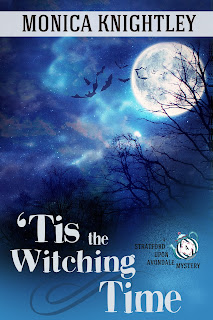 ‘Tis the Witching Time will be available as an ebook from Amazon, on Tuesday, October 18th. Here’s a little bit about this fun new STRATFORD UPON AVONDALE mystery:
It’s the Samhain Harvest Festival in Stratford Upon Avondale! A time for all things magical and mysterious. And maybe a little…murderous.
When a self-proclaimed psychic comes to town for Samhain, her tarot card readings become the talk of the village. But when the readings start coming true is it just luck, or something a bit more supernatural? And how could she have correctly predicted the murder that shocks the town during the festivities? Unless she had something to do with it…
Tea room owner and amateur sleuth, Maggie O’Flynn, finds herself questioning her lack of belief in the supernatural when the uncle of a friend is murdered, and the visiting psychic and her niece become mixed-up in the investigation. Clairvoyance, ghosts, things that go bump in the night—how much of it is real?

Posted by Monica Knightley at 12:25 PM No comments: