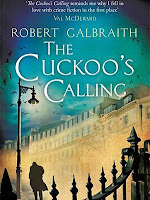 The recent news of J.K. Rowling’s clever little deception with her latest book has readers and writers everywhere all abuzz. Her new book, THE CUCKOO’S CALLING, a mystery, was published under the pseudonym Robert Galbraith to allow her to “publish without hype or expectation” as she told the Sunday Times of London. Rowling’s hope was to get truthful feedback on her novel, without her famous name swaying the reactions of reviewers and readers.

Even written by Robert Galbraith, unknown debut author, the book garnered excellent reviews and critics praised it. For a debut author ‘Mr. Galbraith’ should have been thrilled to be published by an imprint of one of the Big Six publishers, especially after being rejected by at least one other publisher. Yes, Ms. Rowling jumped through all the hoops. She WAS Robert Galbraith, former member of the Royal Military Police and married father of two sons, and unknown writer who gets rejection letters.

And yet all that changed for Mr. Galbraith on Saturday afternoon, July 13th. As a debut author, unknown but the recipient of the kind of reviews all first-time authors dream about, as well as those coveted five-star ratings on Amazon, Mr. Galbraith’s book had only sold 1,500 copies since its publication on April 30, 2013. Now, I would be thrilled to sell 1,500 copies of my debut novel! But, I’m not Robert Galbraith, and I’m sure not J.K. Rowling. Despite all the pieces of the puzzle being in place for him, Robert Galbraith was still unknown, and his book wasn’t topping any charts. Once the truth came out ‘his’ book sped up the best sellers lists and was number one on Amazon by the end of the day, at least here on the west coast of the U.S. In fact, I ordered it a mere two hours after the story broke, and was told I wouldn’t be getting it delivered until August…backordered.

Discoverability. We hear that word all the time as we learn how to promote our debut novels, or even second or third books. Robert Galbraith’s little mystery was chugging along nicely, but he wasn’t exactly a household name. He certainly had not been discovered. In time, he might have been, but the odds were against it. The odds are against any of us getting discovered, of being the author of that next big breakout book. This was the truth that hit me as I read about Rowling’s well-intentioned ruse. I found myself feeling sad for the fictional former member of the Royal Military Police.

So why do we write? Why does the richest woman in Great Britain, the woman who has sold almost as many books as God, continue to write, even going so far as to do so under a pen name? Why do we write when the odds are against any of us becoming the next J.K. Rowling? Because we love to. Because we can’t NOT write. Because to not write would kill us. Yes, we hope people will read what we write. We dream of discovery. But in the end, it doesn’t matter. We will write the books regardless of the outcome.

I just hope that one day I can be a Robert Galbraith, with wonderful reviews for my book, and sales of 1,500 copies.

Posted by Monica Knightley at 7:59 AM 4 comments:

It was a short column in a Saturday edition of the Wall Street Journal that made me stop saying “Someday” and changed that to “Now.” As in, now I will begin to write. What was this life-altering article? Answer: A Word Craft column by Frederick Forsyth on doing research. I can hear you now, Reader, saying, “Wow! What a sexy topic! No wonder she was swept away.”

Ah, but obviously I was.

Mr. Forsyth’s column had the effect of someone handing me the keys to the kingdom. For years I had so many ideas for novels whirling around in my mind, but one in particular always floated to the top. It was a novel set in the Civil War. But how to write it? I had no idea where to start, or where to take it. But Forsyth’s keys unlocked the door that blocked my way.

I’ll return to that column in a moment.

When I first read the Forsyth column I had never thought of research as guiding the story. Never having written a novel, I assumed a writer knew what he/she was going to write before a word was written, did the specific research that would allow that book to be written—no more, no less, and wrote the book. Immersing oneself in the research and feeling the time and place as a part of the writing process never occurred to me. So obvious now, but it wasn’t then.

Final Disclaimer: I’m currently working on a YA novel that takes place in four different historical time periods, all in a European country. I got stuck in Model 1, researching to procrastinate. I was so afraid to start writing the book, I found one thing after another that I “needed” to research before I could begin. I started thinking I had to know EVERYTHING before I could begin. But after hitting myself upside the head I remembered the Hybrid model, and I’ve been happily writing ever since.

How do you handle research?