The Big Day is fast approaching for this fledgling writer: Book Release Day! On Wednesday, (April 9), my debut novel, The Vampire’s Passion, will be available as an ebook, from Amazon and from Soul Mate Publishing. Later, it will also be available as a paperback.

As a little teaser, I’m posting a short excerpt from the book. This scene happens right after the heroine, Claire Seymour, has discovered her gorgeous, enigmatic Oxford literature professor, Gabriel Augustine, in the midst of committing a heinous act. After becoming physically ill, she questions Gabriel about what she just witnessed.
** 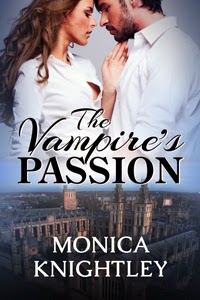 “What the hell?” I tried to begin again. “Your mouth, her throat, the, the, oh god, the blood!”
Again in the low, throaty voice he answered, “I was getting sustenance.” His eyes never wavered from mine, even as he answered for the horror I had just witnessed.
“Sustenance,” the word rolled around in my mouth, like I had never heard it before, had no meaning to attach to it. I repeated it, my brows drawn together while I looked into his eyes, “Sustenance”.
“That which nourishes,” Gabriel helped.
“Yes, I know. But I can’t put that word together with what I saw.” I saw the image in my mind again and felt the bile begin to rise once more. I looked down at the hand that still held me, and he loosened the grip, ever so slightly.
For several moments neither of us spoke. Without looking at his face I knew his eyes were on me, could feel them. Suddenly cold, very, very cold, I shivered. Gabriel reached back into the pack and took out my sweater, placing it around my shoulders. I risked a look at him…
…“What are you?”
Gabriel moved his face closer to mine and nearly whispered, “Not human.” His face was but a few inches from mine—I could feel his breath on my face, smell his scent. His eyes continued to search mine. “I am vampire.”
“Vampire,” I whispered, feeling my mouth form the alien word. “You want me to believe,” my voice was getting louder and louder as I spoke the incredulous words, “that I just saw a mythical creature commit a mythical act?”
“No. I’m telling you that you just witnessed a vampire, me, drink the blood of a willing donor, so that it could continue to exist.” He spoke each word slowly, carefully, enunciating every syllable.
When he mentioned the “willing donor” I remembered the other party in this astonishingly macabre incident.
“The woman! Oh crap! She needs a doctor! That is if she is even still alive.” My eyes held a large question when I said the word “if”.
“The woman is fine, she doesn’t require any medical care,” he said dismissively.
He released my arm and took my hand in both of his. I was horrified. Horrified that I felt no need to pull my hand out of his. What was wrong with me?
“Claire, look at me.” Claire. He had never said my first name before. I had just seen this man sucking blood from a woman’s neck and all I could focus on at that moment was how my name sounded when he said it. It sounded lovely, melodic, seductive. I looked up at him. “Claire,” I watched his soft, sensuous lips form my name as he said it again. Lips that had just been sucking blood. “I am sorry, so sorry, that you had to see that, but I’ve been doing that for a very, very long time. I am a vampire. I continue to exist because I drink human blood from living people.” He was speaking softly, his eyes never leaving my face, continually scanning it to watch my reaction I suppose. “It is a part of who I am, yes, a part that is a monster from the worst kind of nightmare. But it doesn’t define me and never has. I am a man, an Oxford professor, a friend to many, and a mentor to still others. I cannot change what I am. Cannot change that I am vampire, not human.”
I could only stare at him, stupidly, mouth parted. What he was saying to me was outrageous and unbelievable, yet I knew it was the truth. He was telling me the truth. Our faces were still close together—I could still feel his breath on me. We sat there like that for I don’t know how long. Seconds, minutes, hours, time was meaningless. I was looking into the glorious face of a creature from horror stories, and I couldn’t look away. His dark, thickly lashed eyes, his long straight nose, deep pink, soft lips, the lock of dark hair that had fallen on his forehead.
“I was named for an angel, my surname is that of a saint, and yet I am a creation of Hades himself.” His quiet voice held despair.
**

I hope you’ll check out the rest of Claire’s and Gabriel’s story on Wednesday. Personally, I’m madly in love with Gabriel, and look forward to letting him finally see the light of day. WEDNESDAY!
Happy Reading!